It seems like there is less and less time during the day anymore. Instead of having 24 hours, it feels more like we have 20 hours, sometimes less. Let’s face it, we are all busy… much busier than our parents before us. Between work, the kids’ practices, games, recitals, cleaning, bills and other daily tasks, it feels like we are scheduling our life out to the exact minute. It’s almost impossible to find time, let alone the motivation, to do anything for our selves, let alone workout.

One mom has somehow found the motivation to not only work out, but to take part in races and triathlons. In her blog, Mom Swim Bike Run, she talks about overcoming the obstacles, challenges and joys in training, balancing life and raising three kids. She discusses common questions and issues while keeping the blog fun and light.

I guarantee if you’re not feeling motivated, this blog will motivate you. If a mom of three can balance life, family and extensive training, then I think we all can hit the gym or trail for 30 minutes.

At customized girl we love to customize anything we can get our hands on. We especially love to customize underwear with cute and sometimes flirty sayings. While we’ve come to consider ourselves pro’s in the customization world, we are no experts when it comes to actually finding the right fit of underwear, or best underwear for body types.

That’s where the Guilty Pleasures site comes in handy.  These ladies know lingerie.  You can find anything you might ever possibly need to know about intimates there.

They have everything from sizing tips, information on shape wear, to choosing the right bras and panties to fit your body type.  Guess what? It doesn’t stop there.  They cover all the hot trends too!

Then, as if this site couldn’t get any better, it does.  They have contributing writers who are actual lingerie designers! So you know that the information you’re getting here is the best.

Next time your creating some undies and aren’t sure which ones to choose, or what to put on them, check out this sexy lingerie blog.

Are you a mom who eats, sleeps, and breathes cheerleading? You spend your days driving to practices, preparing for games, and attending competitions. You’re the mom that knows the difference between a chant and a cheer. Well your not alone. There are tons of moms out there just like you. They too spend they’re time cleaning uniforms, making bows and adding glitter and puffy paint to team shirts. They do all of this just to support their children and their squads. Now that’s what I call love.

If you feel like you’re the only one and nobody else could possible understand the stresses of being a cheer mom, have no fear because there is a blog for you.  Confessions of Cheer Mom, is written by a mother who is both a cheer mom and an entrepreneur. Her blog discusses every problem that you might experience when being involved in this competitive sport. Lisa talks about everything from choosing the right gym; to how to avoid becoming a pushy parent.  She truly understands the one sport in which the season never seems to end.

So if ever you need someone who can relate, check out Lisa’s blog. 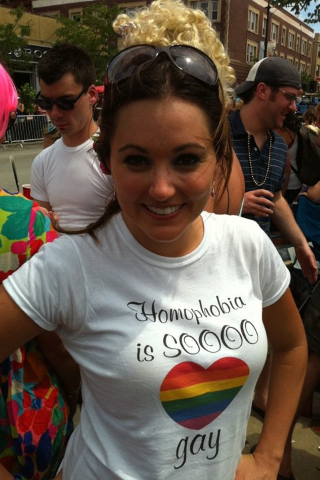 I order so much from Customized Girl and I love it all. My “homophobia is so gay” tank was a huge hit at the gay pride parade in Chicago! -Melissa S. Chicago, IL

At the time of the 1969 riot, American gay and lesbian citizens faced a legal system that was much more anti-homosexual than other countries.  In fact, very few establishments welcomed openly gay people in the 1950’s and 1960’s, and those that did were often bars.  The riots at the Stonewall Inn are frequently cited as the first instance in American history when people in the homosexual community fought back against a government-sponsored system that persecuted sexual minorities.

As a result, June as become a month of acceptance and welcoming of diversity, regardless of sexual orientation.  Gay and lesbian groups celebrate this special time with picnics, pride parades, parties, and memorials for those lost due to HIV and AIDS.  Gay and Lesbian friendly companies also make great contributions to the events that take place this month.  They provide rainbow products, banners, and even sponsor many of the events themselves.

The impact and support that has transpired from these events is nothing short of phenomenal, and has raised awareness for the Gay, Lesbian, Bisexual, and Transgender community immensely.  If you need any Gay and Lesbian Pride apparel for an upcoming parade or just want to show your support, check out our selection HERE or design your own!

Our Junior Fit Basic Tee (now available in 7 colors!) and our Misses Relaxed Fit Basic Tee are now only $11.97! With this price in additiona to Group Discount AND $3.94 economy shipping, this price just can’t be beat, especially if you are getting those Family Reunion tees designed! Customize any of our template designs or start from scratch! This offer ends 6/20/11, 11:59 EST so GET CUSTOMIZING!

You and Your BFF! 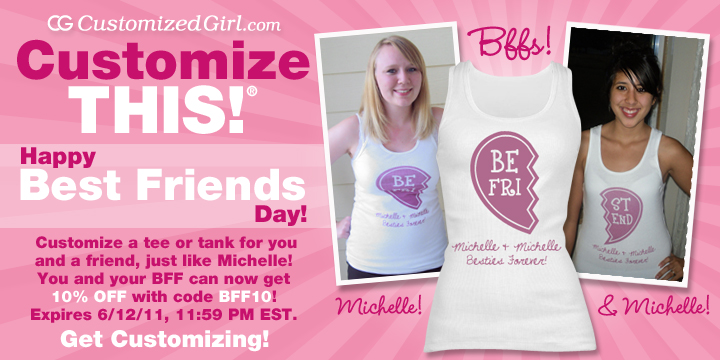 How fun would it be to customize a unique tee, tank or accessory for you and your BFF! Get some inspiration from Michelle’s customized tank designs for her and her BFF Michelle. That’s right–they are both named Michelle!

So, my name is Michelle and my best friends name is Michelle. We’ve been besties for 7 years. Right after high school she got married and moved from Washington state to Florida. She recently came home for a wedding and we decided we HAD to have matching shirts to remember each other by and celebrate! Both of our favorite colors is pink so we knew we needed pink on it. On the back we have a shape of the U.S. with stars indicating where we live. We also decided to put one of our favorite quotes and inside joke on it from a popular internet video, which can be found on YouTube called “Shoes” by Liam Sullivan. This pretty much sums it up! We are so happy with our product and love wearing them around and remembering our fun summer reunion. Now we can’t wait for Michelle in Florida to come home for good in 2012!

Thanks Michelle for sharing and to the rest of you, get customizing your very own BFF tanks! Have fun with it. That’s what it is all about!

Hello, Sunshine! Time to Soak in the Savings!