April is just about over, and you know what that means…it’s gonna be May (cue the Justin Timberlake memes). Start this month off right and treat yourself. Take $10 off any order of $80+ with code: MAYSV – expires 5/31/19.

We want to mention one of our newest additions that we’re really excited about: Champion leggings! They check all of the important boxes: super comfy, mid-rise, full length, breathable, and best of all – customizable. You can add your own text and/or art down the side of the thigh and also down the back of the calf. Add a school name, gym name, or funny workout saying to make them one of a kind. They’re great for just about anything: sports teams, gym sessions, or lounging. Check out some of our templates for design inspiration, or start from scratch. Custom leggings for the win!

Now that it’s May, we’re that much closer to the end of the school year. Looking for a great way to say ‘Thank You’ to an amazing teacher? Check out our selection of custom teacher gifts. We’ve got coffee mugs, tote bags, aprons, and more. A custom gift is a great way to let a special teacher know how much you appreciate them.

Lastly, it’s not too early to start thinking about Father’s Day. Snag a cool, custom gift to let Dad know how much he rocks. 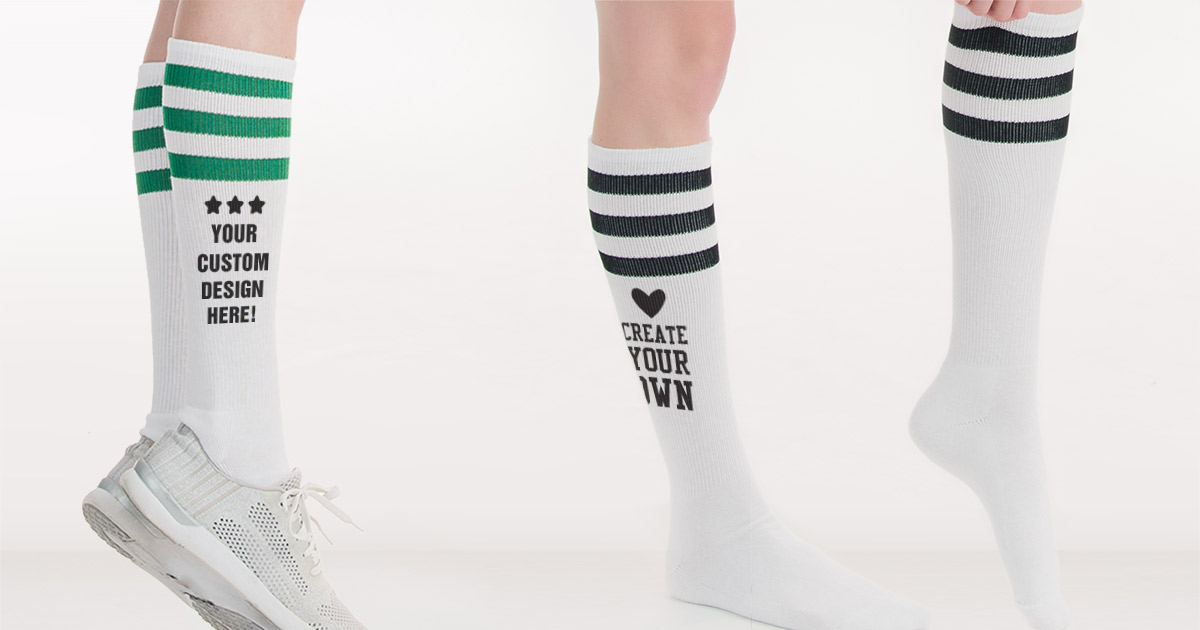 Here’s the number one thing you need to know:

We print on the outside of BOTH socks.

In the design center, you’re creating one design. It looks like one design. But you are getting TWO prints.

Okay, let me back up: yes, we sell Custom Socks.

And even no-show socks that we print on the bottom! These socks are perfect for putting your feet up on a stool and telling the world something like…

If you can read this, don’t bother me I am watching Hallmark Channel movies.

(Just as an example and also something I feel on a weekly basis deep in my bones.)

The point is, you can say, literally, whatever you want. Add text. Add art from our library. Even upload an image.

However, we recommend big, bold designs that are easy to read. Use the Add Text tab and choose one of our nice, big fonts.

Keep that in mind, and you’re sure to create something unique and unforgettable.

We’re coming up on Prince Harry and Meghan Markle’s one year anniversary and we thought this would be the perfect time to share a funny story with you all.

Like most things nowadays, it all began with a hidden romance and a cozy sweatshirt…

We were doing some year over year analysis of our sales on Amazon and we noticed there was a huge spike in sales for our favorite Golden Girls sweatshirt. That got us thinking…what did we miss? We were curious about whether or not there was something behind this, so we put our millennial skills to the test and did what we do best: internet stalking. We dug around and ended up finding something pretty awesome.

Last year in April, a BuzzFeed News article was published about Prince Harry and Meghan Markle. Even better, the article talks about how Prince Harry was spotted on Meghan Markle’s Instagram wearing a sweatshirt that said “Dorothy in the streets. Blanche in the sheets”. Yes, that’s ours!

Although Harry’s face isn’t fully revealed in the photo, our fellow investigators got to the bottom of it, and it was confirmed: the man in the photo was in fact Prince Harry. Their relationship was new and they were trying to keep it on the DL, which is not surprising. Basically, we just think it’s hilarious that our Golden Girl’s sweatshirt was actually the very first clue about a possible romance between the two all the way back in 2016.