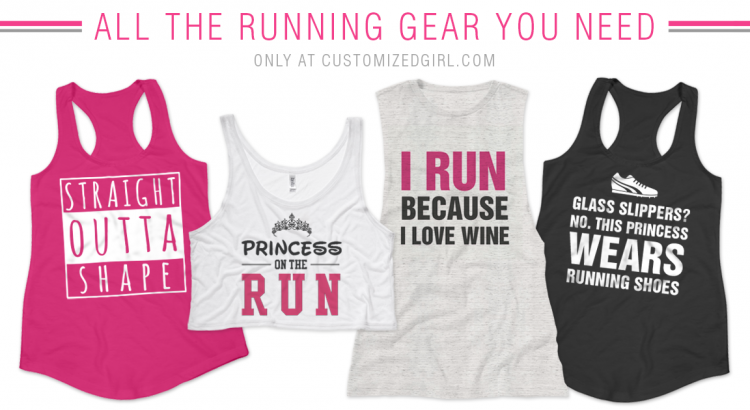 All year long there are many organized running events – 5k’s, half marathons, whole marathons, color runs, charity runs, and everything in between.  Each event has it’s own theme and depending on if your running is purely fitness related or raising funds for a cause, this gives you the perfect opportunity to create amazing running outfits. Customized Girl has put together a gallery full of funny running shirts to help get you motivated for those long, monotonous runs. Start a healthier, fitter life and have fun with it!

Custom running shirts can be the best remedy for lack of motivation. Showing off your new workout gear can encourage healthier habits because you will want to wear it all the time! By customizing any of our designs you can easily add your own workout saying, slogan, or maybe some hilarious inside joke with your runner buddies. Maybe you are just incredibly clever and can start your design from scratch!  Our running gear is not only great for individual runners because of our no minimum policy but even better for bulk orders due to our  group discounts that are automatically adjusted in your shopping cart after 6 or more items are added. Now that’s a deal.

Customized Girl offers a variety of apparel that is perfect for any runner’s style. Our performance wear enhances your ability to workout more effectively with breathable material and moisture wicking properties that are sleek, comfortable, and good looking. We offer custom socks, custom bags, water bottles, and custom hats that are ready to customize with your city and date. Our design center makes it easy to upload your logo or sponsor logo’s to apparel that will help market your brand to potential customers.

We mentioned that our gallery is already full of hilarious running designs but if you are looking for specific team events we offer the following:

Are you fitness trainer or own a yoga studio? Or are you just a trendy individual that has great fitness slogans and sayings? Take your business and brand to the next level by customizing apparel with your logo and opening an online storefront to sell your gear. Check out Customized Girl storefronts and what they can offer your business.

In honor of National Running Day this year, Customized Girl has put together a gallery full of funny running shirts to help get you motivated for those long, monotonous runs. Start a healthier, fitter life and have fun with it! 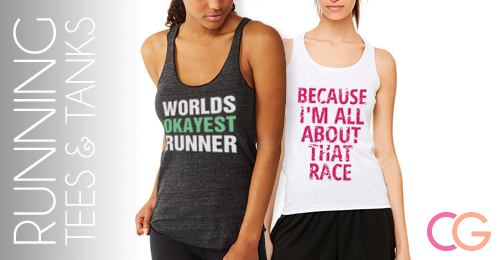 One of the best solutions to encourage and establish great running habits is new workout gear. Customized Girl is a great place to shop for workout gear and an even better place to put your motivation on a tee or tank. We offer socks, bags, water bottles, and performance wear that are ready to customize with your favorite workout saying or slogan. We already offer some hilarious fitness designs but if you don’t like the style or color of the design you can simply switch out the product. Our performance wear enhances your ability to workout more effectively with breathable material and moisture wicking properties that are sleek, comfortable, and good looking. Our running gear is great for bulk orders and even better for individual runners who want to celebrate their running achievements or to just give other runners a good laugh.

Are you fitness trainer or own a yoga studio? Or are you just a trendy individual that has great fitness slogans and sayings? Take your business and brand to the next level by customizing apparel with your logo and opening an online storefront to sell your gear. We offer a large variety of apparel and accessories including gym bags, water bottles, and phone cases to help spread your brand awareness.  Check out Customized Girl storefronts and what they can offer your business.

Kick off this holiday season with a Christmas themed marathon or 5k! Christmas runs have become so popular that different themed races are being created. An ugly Christmas sweater run, a Santa run, and a Christmas Story run are just a few to name. The goal to these runs are not only to burn a few calories but to also spread some holiday cheer. Runners dress up in Christmas themed apparel that include Santa hats and ugly Christmas sweaters. Customized Girl has taken the next step and put together some great Christmas Run designs that will help complete your running gear this year. 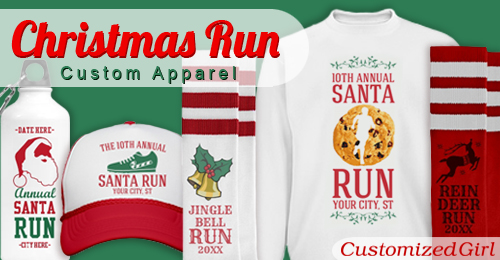 Customized Girl offer socks, bags, water bottles, and performance wear that are ready to customize with your city and date. You can easily take any of our designs and put it on multiple products. Have a design in mind but don’t see it in our design gallery? Our design center is straightforward and we offer endless amount of options in our Christmas art library.

Our Christmas Run Apparel is great for bulk orders and even better for individual runners who want to celebrate their running achievements. Make this year extra special by creating your own unique and fun running gear!

Our Label Rebels are always on the go with their custom designs. We’ve featured Label Rebels designing their own shirts for bachelorette parties, raves, an up-and-coming fashion label, mud runners, bowling parties and more. It only makes sense to feature marathon runners! Lately it seems marathon running is happening everywhere you turn. Color runs, zombie runs, holiday runs, runs that reward you with beer. The more and more these fun fitness challenges pop up, so do custom running shirts!

“My husband and I ran the 2013 San Antonio Rock N’ Roll Marathon and a Half together this year. The guys ran the full marathon and the girls ran the half. We wanted to do themed running shirts that related to rock n’ roll so we came up with “Sole Sisters” for the girls who were doing the half. The numbers on the back are the number of half marathons we had done including the one we were running that day… The run was very hot, but the bamboo fabric of the shirts worked great. We were very pleased with the order!” 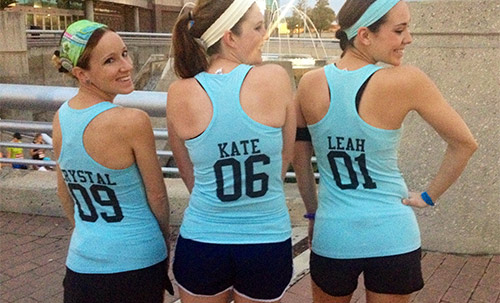 “The three guys in the photo below ran the 2013 San Antonio Rock N’ Roll marathon together. Two of the guys brew their own beer and wanted to be called the brews brothers. The third guy who is named “Guy” does not brew beer, so we decided to do” The Brews Brothers” (in the spirit of rock n’ roll and brewing beer) and put “And Guy” on the back. We of course reversed it for Guy’s shirt. Here is a photo of the guys! All three loved the shirt and had no problems running 26.2 miles in it on a very hot Texas day.” 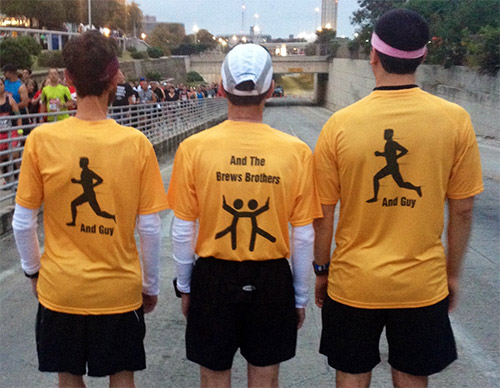 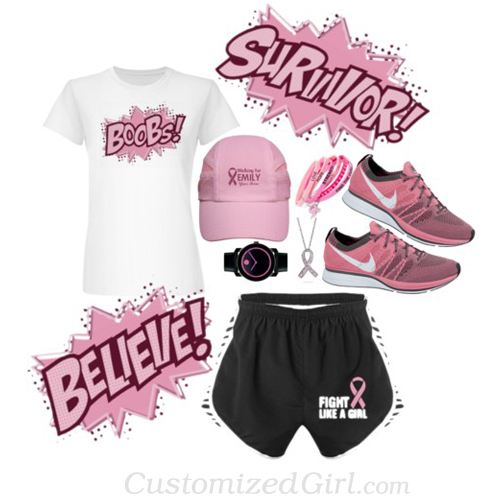 Run For A Cure by customizedgirl

Pow Believe In A Cure
customizedgirl.com

Lace up your running shoes and start stretching because before you know it, your big race will be here! Whether it is a half marathon, mud run or triathlon, you need to have gear that will help you perform your very best and at the same time, express who you are as a runner! With many races having their own theme or special twist, this also gives you the perfect opportunity to create a running outfit to match the race’s theme. For runners, the apparel item that many look forward to creating is the custom running shirt. Creating a custom running shirt gives you the perfect canvas to make a statement! This statement could be funny, motivational or even competitive! Maybe you’re running to support someone or to support a special cause. A custom running shirt is a great way to spread your message!

Running is a fun sport because it can be both a group or solo event. If you have a race coming up with team members, get the group together and create custom running shirts for everyone so you and your teammates match! If your next upcoming race is a solo run, why not create a custom running shirt to let your competitors know they will soon be eating your dust?

Any of the designs below can be placed on our  performance tees, tank tops, crop tops, and long sleeve hoodies. Let your custom running shirt do the talking as you focus on improving your best time and crossing that finish line!

Our Customers Love to Run

Sign up for our newsletter and we’ll send you exclusive offers!

We’re not kidding when we say that our customers love to run! They’ve competed in 5Ks, marathons, triathalons, tough mudders and dirty girl mud runs, to name a few. No matter the race, they all have one thing in common: custom shirts! Whether tees, tanks or performance wear, custom shirts are a great way to have some fun and stand out in the crowd.

Take a look at some of the great custom shirts our customers have made for races: 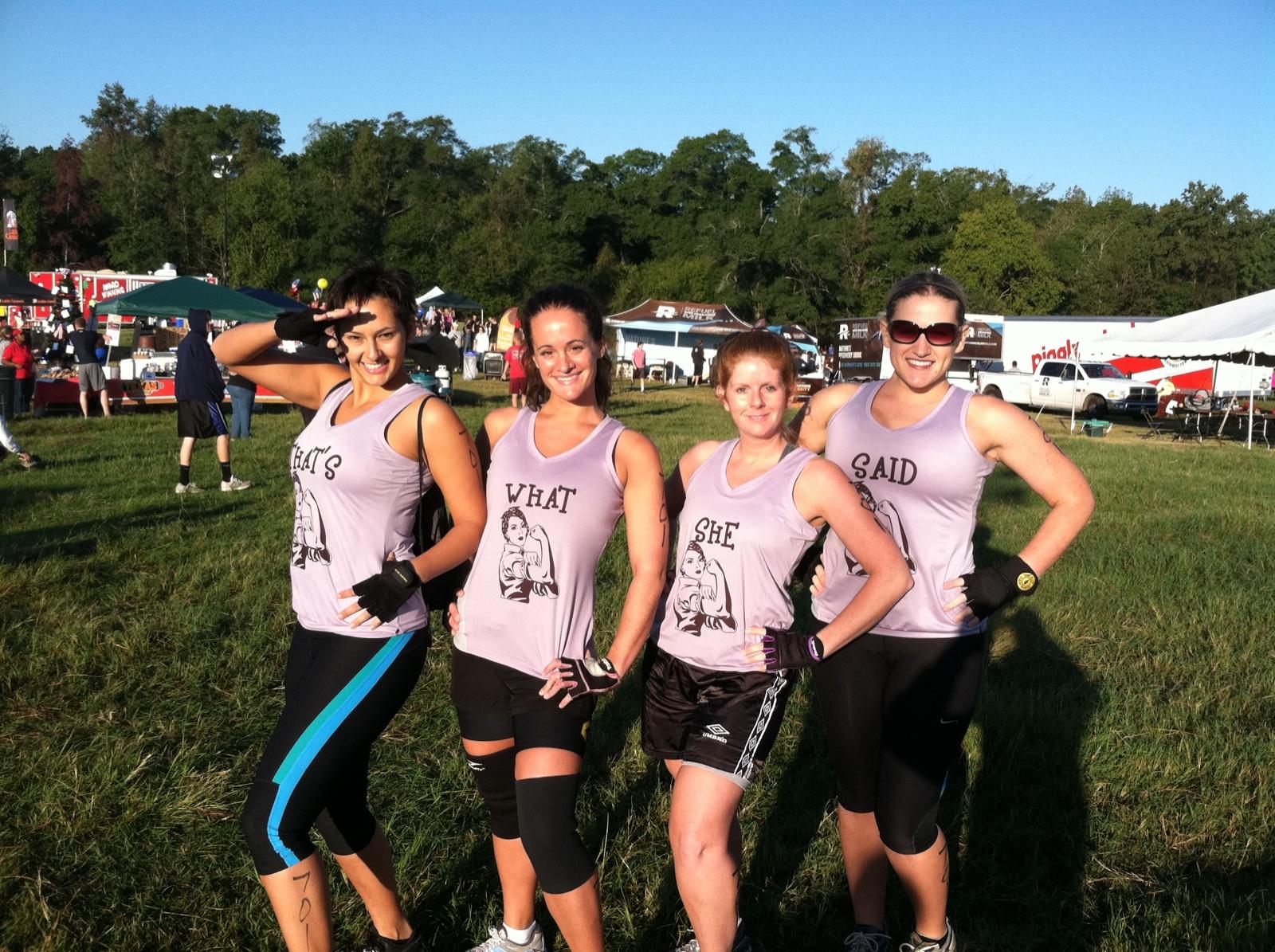 Each lady’s custom tank top had a different word to make up “That’s What She Said”. 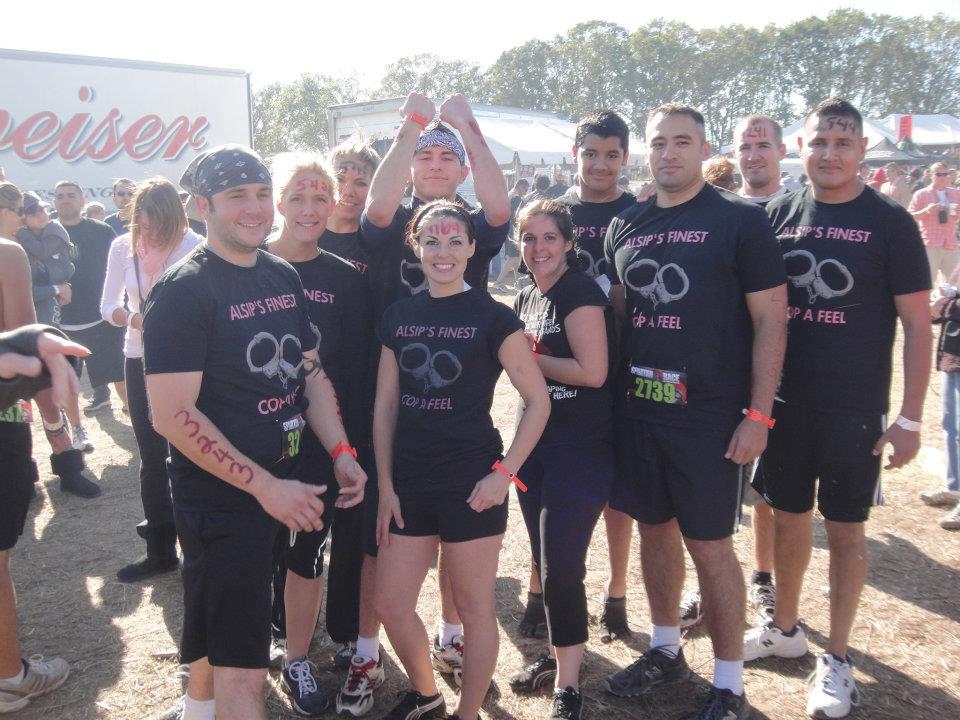 This group of police officers got a variety of men’s and women’s tees, appropriately adorned with handcuff art. 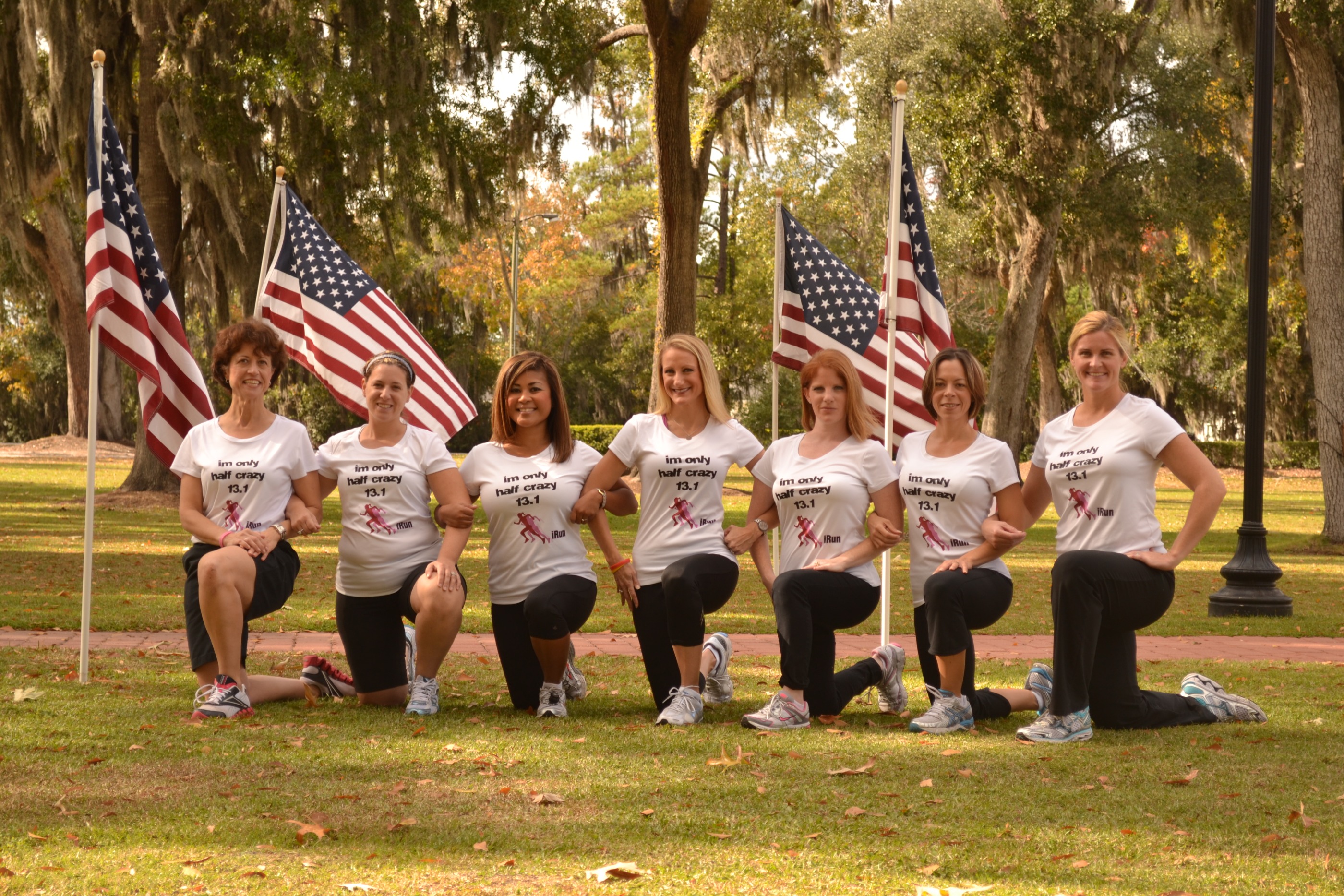 Performance tees are a great way to stay cool and dry while doing a longer race, like the half marathon these ladies did. 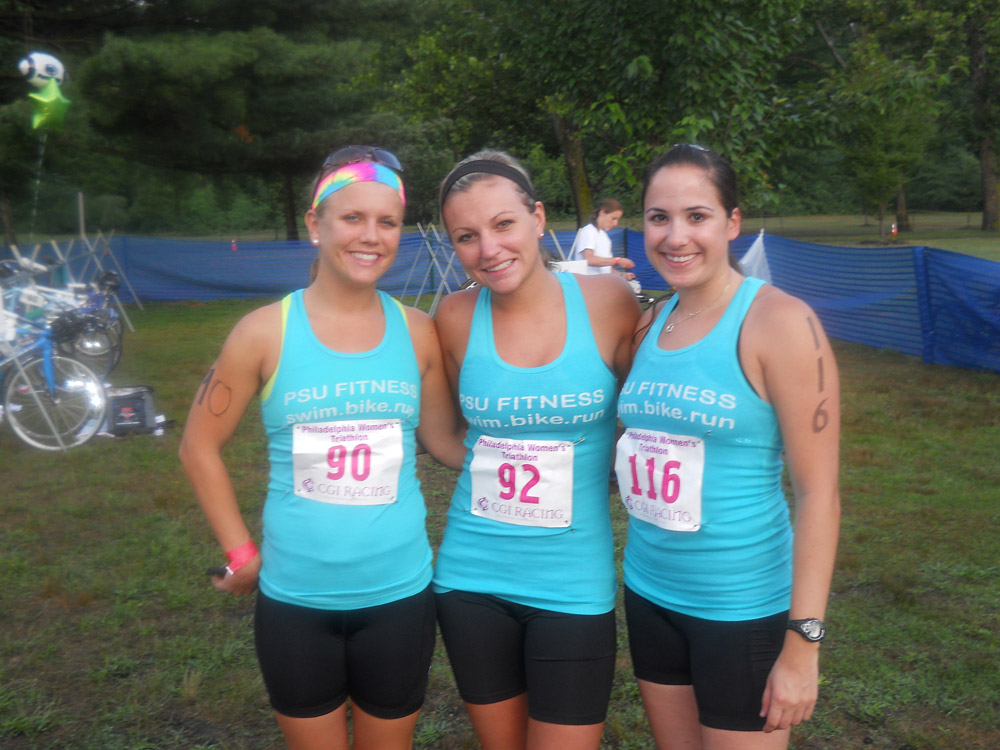 Our bamboo racerback tank tops were the perfect fit for these ladies during their triathalon! 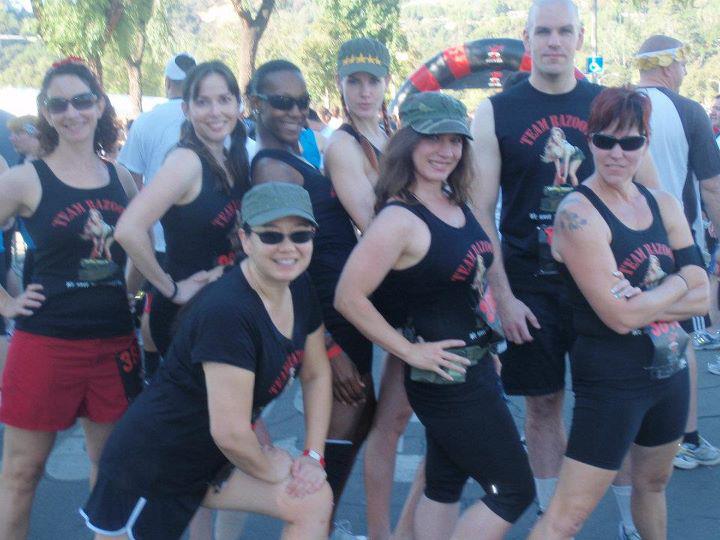 These runners ordered women’s tanks and tees, as well as a men’s sleveless tee. Remember, our group discounts kick in at six items and you can mix and match!

You can customize your shirts with names and numbers, like these guys did on their custom performance shirts. 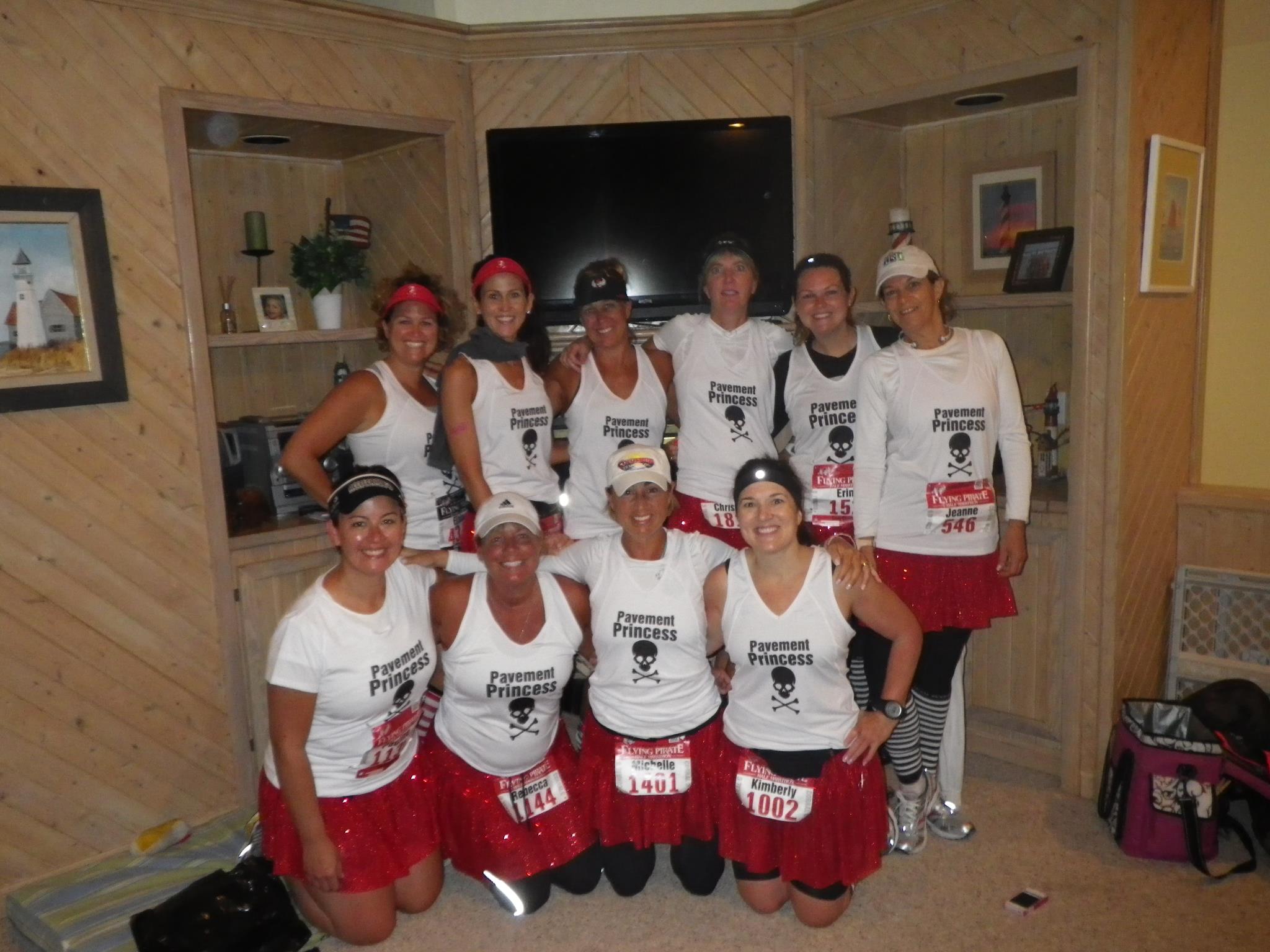 This fun group of ladies not only got custom mesh back tank tops, but also wore glittery tutus when they ran!

Have these customers inspired you to  go out and run a race? If so, we hope you wear custom shirts from Customized Girl!