Hi CG fans! This week we wanted to give a special thank you to two of our wonderful fans, Bristy and her pooch Brady Moss. Below is their story! 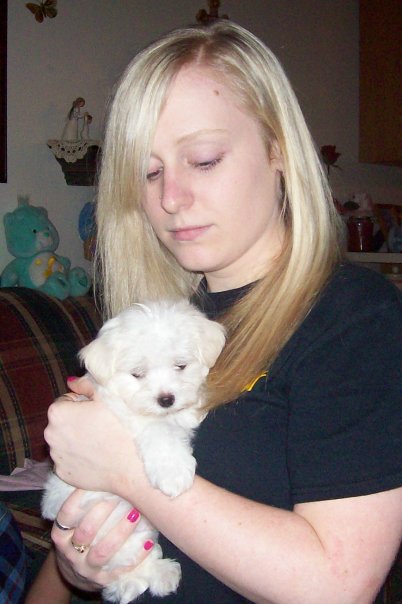 “My overall experience with your site has been nothing but great. I stumbled upon Customized Girl several months ago when trying to plan shirts for our family reunion. We actually didn’t use the site for the family reunion shirts, but after playing around on it, I fell in love. I was so impressed with not only all the different things that could be customized, but the ways they could be customized in general just blew my mind. It offered so much more than any other site or shirt screening business that I had ever been to. Our family reunion was the first week of August, and I’ve ordered four things from your site since then. The two shirts and sweatshirt were just for my own personal style. The first was a bella style shirt that I had made to wear to the concert of my favorite band which I will be seeing in Chicago. The second shirt I ordered was a baseball t-shirt with an inside joke phrase on it that I knew I could never buy anywhere else. The third was a sweatshirt that proclaims environmental awareness, which is something close to my heart. The quality of all three of these items is just phenomenal. The shirts fit perfect to size, according to the chart. Also the screening itself is great quality and has held up very well. I couldn’t be happier with my new clothing!

However my favorite article of clothing that I’ve ordered through Customized Girl isn’t even for me. It’s a sweatshirt worn by my dog, Brady Moss.
Brady Moss came into my life three years ago this October. We already had one dog, a large black lab named Shadow, who is about as perfect of a dog as any family could hope for. After an intense few months of research, my Nana and I decided that a Maltese was the breed for me. I then set to checking the newspaper religiously, hoping and praying for an ad for the perfect Maltese puppy. I checked for months and months and nothing ever showed up. I had all but given up hope when finally while checking the paper one day at my work an ad for Maltese puppies living about two hours away appeared. We instantly called the breeder and set everything up that when the puppies reached twelve weeks old, I would have my very own male Maltese puppy. 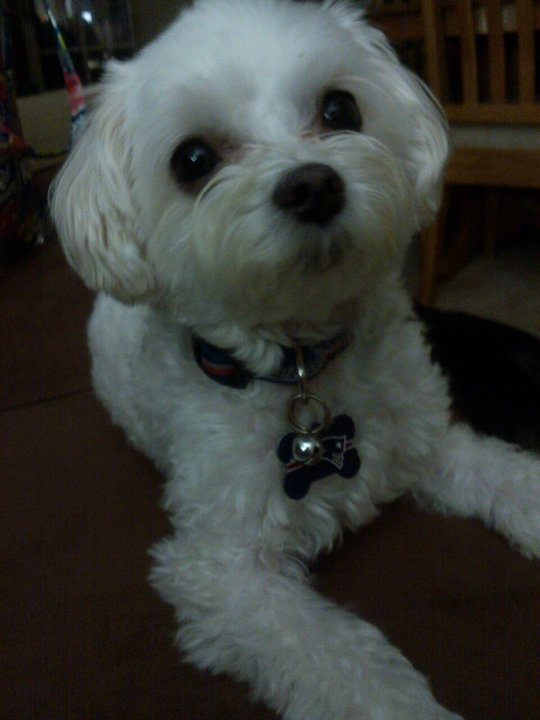 The time of his arrival was drawing closer and I still didn’t have a name for my puppy. I got on the computer to check my e-mail and saw that I had an e-mail from the New England Patriots website. My Dad is die hard Patriots fan and therefore my sisters and I are the very same. The previous season our team was 16-0 and my sister and I always said it was because Tom Brady and Randy Moss had this incredible, telepathic bond. Every time we watched a game we would scream, “ BRADY, MOSS – GO!” As soon as I saw that e-mail it clicked. My new puppy officially became Brady Moss before he even set foot in our home.
When I saw the sweatshirts on Customized Girl I immediately fell in love and knew he just had to have one. This was especially the case when I saw that not only could I have his name put on it, but also our beloved Patriots symbol! This sweatshirt is customized absolutely perfect for him and I know for a fact that it would be impossible to get it anywhere else!
Brady Moss is a special little guy. He might be biologically a dog, but he doesn’t know it. Most of this is my own doing. I have called him my “son” since before I even brought him home. I treat him like I would treat my own child. He is spoiled. But most importantly he shows me unconditional love. Brady Moss gotten me through a lot of hard times. I believe that everything happens for a reason and I truly believe that God gave me the little fluffy five pound white dog to always have a little bit of sunshine when things look gray.”
Make your pooch the envy of every dog on the block with Customized Girl’s doggy hoodies! Visit Customized Girl today and design your own!