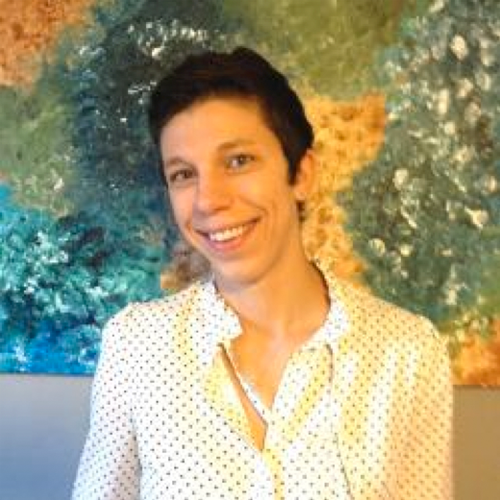 Erin Hoppe was recently recognized in our hometown of Columbus OH with the Emerging Arts Leader Award. She serves as the Executive Director for the VSA – a community of inspired artists that seek to bridge art and disability. Spend three minutes around her and you’re inspired. We recently had the opportunity to chat with Erin, and here’s her story.

I guess you could say as a kid. I was always kind of a nerd. I’m not really into creating my own art and never really was but I have always had an appreciation for it. My parents raised me that way.

It was founded in 1986 as a non-profit organization and we now have 34 locations throughout the U.S. and are an international organization. We work to advocate for accessibility and equality, advance careers in the arts, help communities, and improve academic achievements of Ohio’s students through art integration.

So, what exactly do you do?!

We provide professional opportunities for artists by helping to set up booths at local events so they can sell their work without having to pay the fees that would keep them from doing it on their own. We have art education residencies and we’ll have master artists come in and teach students geometry through dance or how information can be presented visually, verbally, or kinesthetically.

What’s one of your proudest accomplishments?

Well I’m the only full-time staff there so I wear a lot of different hats. And I don’t really look good in hats so I’m trying to make it work. I wish I could have a larger team to work with but the funding just isn’t available right now so until then it’s a lot of self-motivation and working with a small team.

Did you always know you wanted a career in the arts?

No, not at all. I attended college in California, where I’m from, and originally thought I was going to school to become a pharmacist because that’s what my whole family does. But once I started I realized that was not for me. Then around graduation my mom began asking me what I was going to do and I still had no idea. It wasn’t until I talked to one of my professors that he introduced me to art administration. So I moved to D.C. after graduation for an internship and realized it was a perfect fit.

Has this job changed your perspective on your career or life?

A lot of people don’t realize that art is so much more than painting or theater; it is writing, or architecture, or even branding. I always say we should shut down everything that has to do with the arts for 2 days so people can see how important it really is. We wouldn’t have any music, our streets would be a mess because we wouldn’t have the architecture behind them; everything we do and use has some form of art behind it.

This job specifically has really opened my eyes and changed the way I looked at the world. I never thought I knew anyone with a disability but it doesn’t always have to be an obvious disability. I realized a disability could be anything and happen to anyone at anytime. And art feeds your soul, so sometimes we need to not focus on all the big issues like implementing healthcare programs.

What has been the most rewarding moment in your career?

I love the advocating aspect of it. Going to meetings and talking about why art matters and can make a difference even if people aren’t always interested. It’s important to be involved and you can advocate every single day in different ways.

What advice do you have for young women today that are trying to make a difference?

I guess I would say if a job seems too hard just go for it anyway. If it’s what you really want to do just go for it. It’s essential to take part in democracy so get involved.

You recently were awarded the 2013 Emerging Arts Leader in Central Ohio by the Greater Columbus Arts Council, how was that experience?

Yeah it was definitely an honor. I’m very humble and don’t like talking about myself but it was nice to be recognized.

Erin is making a statement that art should be accessible to everyone; that at the core, everyone is an artist. What kind of artist are you?