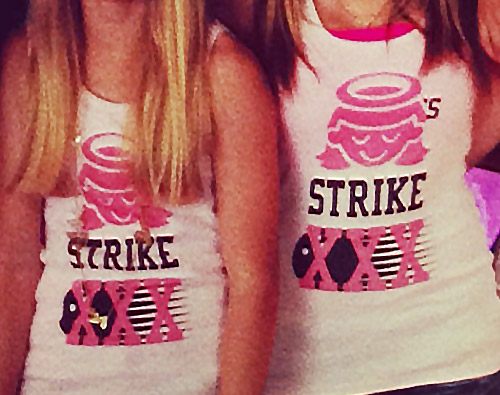 Our Label Rebels always surprise and delight us with something new! And that’s just what Paula did with these custom birthday party shirts she created for her daughter’s 14th birthday party. 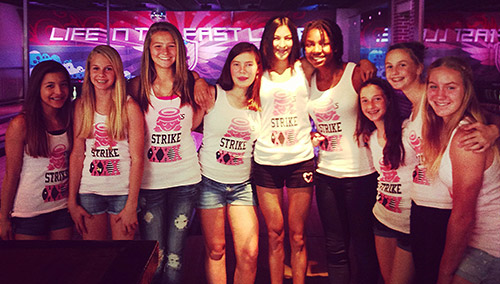 We loved what Paula created for both the front and the back of the shirt. On the back, you’ll notice she included the guest’s name, which is a great personalization idea for parties! Paula used the Name & Number feature in our design center to add each guest’s name to the back of the tank top (and the birthday number: 14). This gives the whole tank top design a sporty look, reminiscent of a team jersey. More bowling teams should absolutely adopt the name and number style of jersey. The pictures Paula sent us certainly tell the story about how great the party was and now each guest has a keepsake to remember the good time they had. We reached out to Paula and asked her to share the story behind her design!

We absolutely loved the shirts we designed. My 14-year-old daughter had a bowling party and the shirts were a huge hit with all the girls. They still wear them even though the party’s long over. It was an extra special touch and we got some great picture memories. It was easy to design… and the turnaround time fast. Thank you! 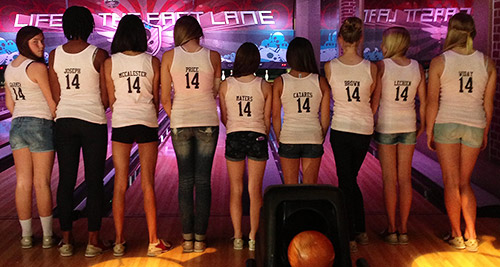 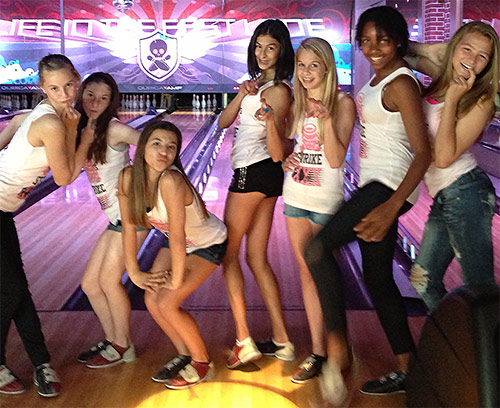 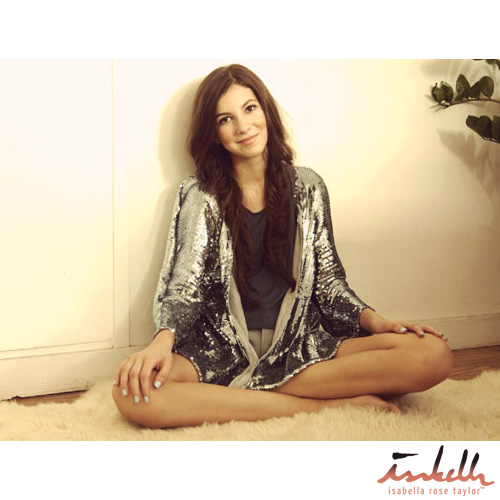 Looking to start a fashion line, but not sure where to begin? Our Label Rebel Isabella Rose Taylor used Customized Girl at the beginning of her career to create one-of-kind designs to test the market. She created an amazing website to sell her fashion line and had Customized Girl do some of the initial printing for her shirts and tanks. Since then, her brand has exploded into a thriving business. She’s been featured on The Today Show, in the Wall Street Journal, and in a ton of other amazing shows and newspapers. And get this: she is twelve years old! Yeah, she is a rather incredible young person.

After things really took off, she needed to produce her line at a higher volume. She eventually began purchasing from a local vendor, but she still uses Customized Girl today for samples. If you have the itch to start your own fashion line, Customized Girl just might be the solution to help you get started, like it was for Isabella! Here’s more about Isabella and the story behind her designs and business. 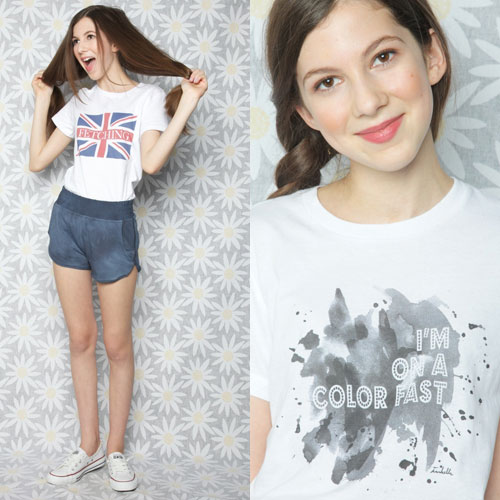 Isabella Rose Taylor is a 12-year-old fashion designer and fine artist from Austin, Texas. With a penchant for design and a lifelong passion for art, Isabella began designing when she was just nine years old, and launched her first clothing collection in February 2012 on her website at www.isabellarosetaylor.com. In September 2012, Isabella debuted her 2013 fall collection in her first runway show during Austin Fashion Week. Isabella quickly caught the attention of the national media and was profiled by The Associated Press that same month.  In 2012, she won the Rising Star Award for Fashion at Austin Fashion Week. Currently, she has been chosen as an “Emerging Designer” for the WWD-MAGIC Emerging Designer Showcase.

Isabella’s fashion collection is a natural extension of her lifelong passion for art. She believes fashion and art are inextricably connected. This sentiment is reflected in her motto, “If art had legs it would be fashion.” Isabella began painting when she was three years old and continues to paint every day. A prolific artist, she had her first two gallery shows in 2012 when she was 11. Her paintings were shown at the 2002 Gallery in Austin and at Kristy Stubbs Gallery in Dallas, where they sold out in a matter of months. Currently, Isabella’s paintings can be purchased through Kristy Stubbs Gallery in Dallas, Texas.  Additionally, she has appeared on the TODAY show and the Steve Harvey Show.

Isabella is also a published writer and poet. She previously served as an editor for Amazing Kids! Magazine and was on the advisory board for Creative Kids Magazine. She is also a member of Mensa and a Davidson Youth Scholar. At only 12 years old, she is a full-time college student pursuing a degree in Art. In 2012, she won the Scholastic Art & Writing Gold Key Award for her couture. Isabella lives in Austin Texas with her family.” 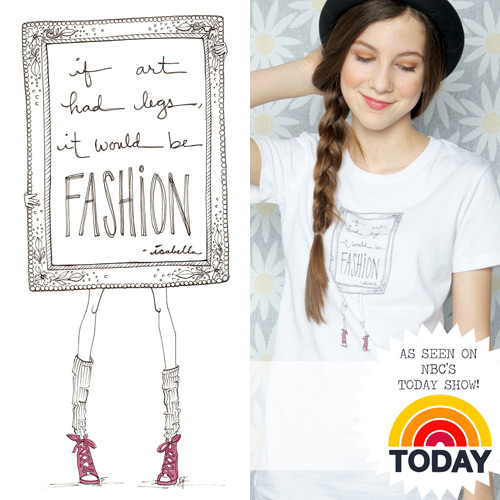 Are you a Label Rebel making a statement with your own custom apparel? Let us know! We’d love to talk. Email customizedgirl@eretailing.com or use the official Customized Girl hashtag #LabelRebel and send out a picture of you wearing your customized apparel. You might be the next Label Rebel featured on our blog and website!

Label Rebel Nat designed these custom crop tops and custom shirts for herself and her group of friends who attended the EDC rave. The EDC rave, also known as Electric Daisy Carnival, is a Friday and Saturday celebration that usually takes place during the month of November. 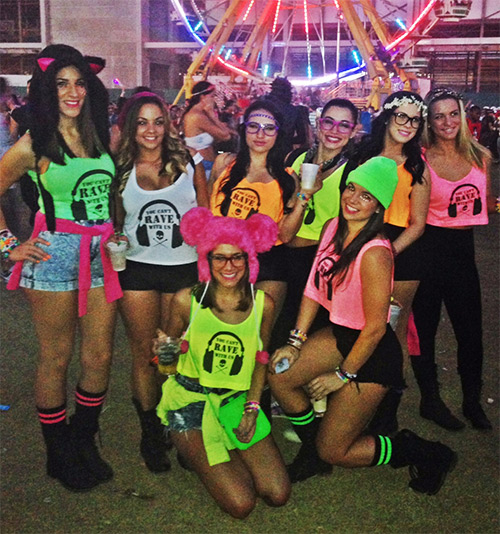 Nat first chose our Ladies Flowy Cropped Tank, which comes in a variety of colors. But the most sensible colors for a rave would of course be the neons.

We loved Nat’s “you can’t rave with us” design. We get excited when we see customers use the Customized Girl Design Center to create a cool design and then put it on multiple styles. In Nat’s case, she ordered a variety of trendy crop tanks and then also unisex t-shirts for the guys. She was able to find several different options, all in neons. In fact, we loved her design so much that we emailed her and asked if she would be willing to share her story and maybe even some pictures. Unfortunately, her story takes a tragic turn, so we’ll just copy and paste her exact quote below.

We were very happy with our order, thank you. We actually made these shirts to attend EDC in Orlando. Unfortunately, our friend passed away that weekend while we were up there. These shirts definitely serve as a memory. If you do post the group picture, would you be able to include the hashtag #smileforoscar? That’s what we’ve been using to keep his name alive. Sincerely, Nat

Nat, we are so sorry for your loss. #smileforoscar 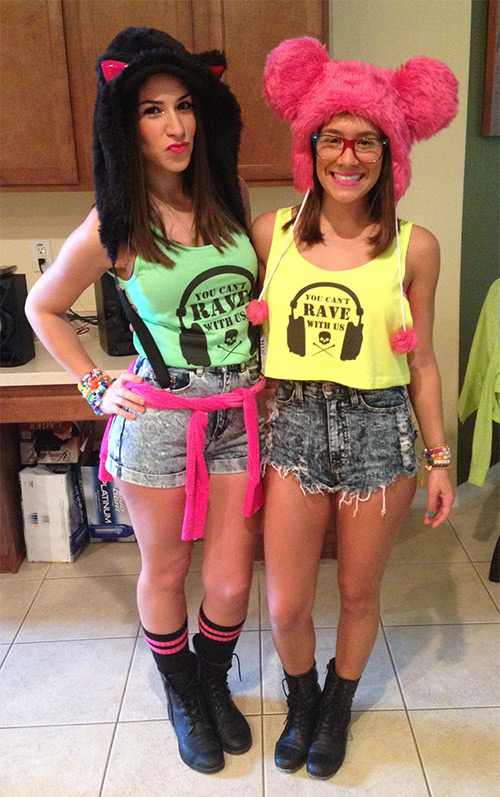 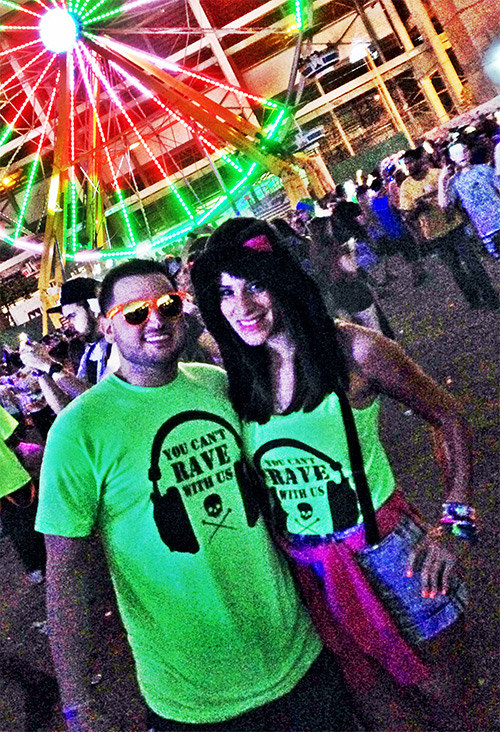 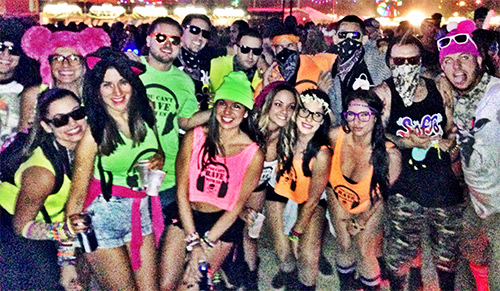 There are so many great designs that our customers create using the design center on Customized Girl! We recently reached out to Karri and asked her to share her story behind the Muddy Mama’s design she created. Here is Kerri’s story behind the design and some great pictures she sent!

“I was very happy with the Mud Run shirts I ordered back in April. They were well made and the design looked great! The sizes fit well also. Three friends and I participated in the Palmetto Mud Endeavor on May 18, in Anderson,SC. It was an awesome 5K run with about 20 obstacles. The pink shirts took a beating, but made our team stand out and helped us stay together in the crowded parts of the course. I would definitely recommend you guys to anyone looking to customize shirts for any occasion!” 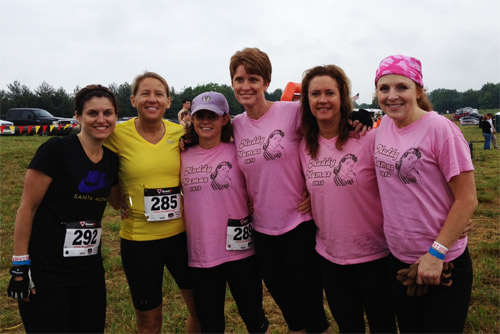 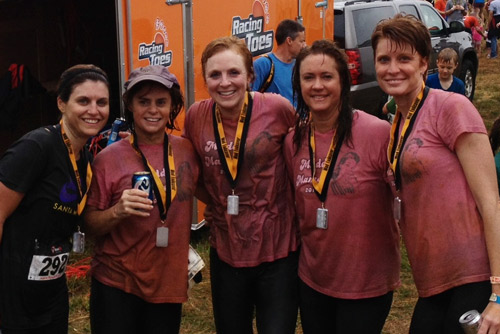 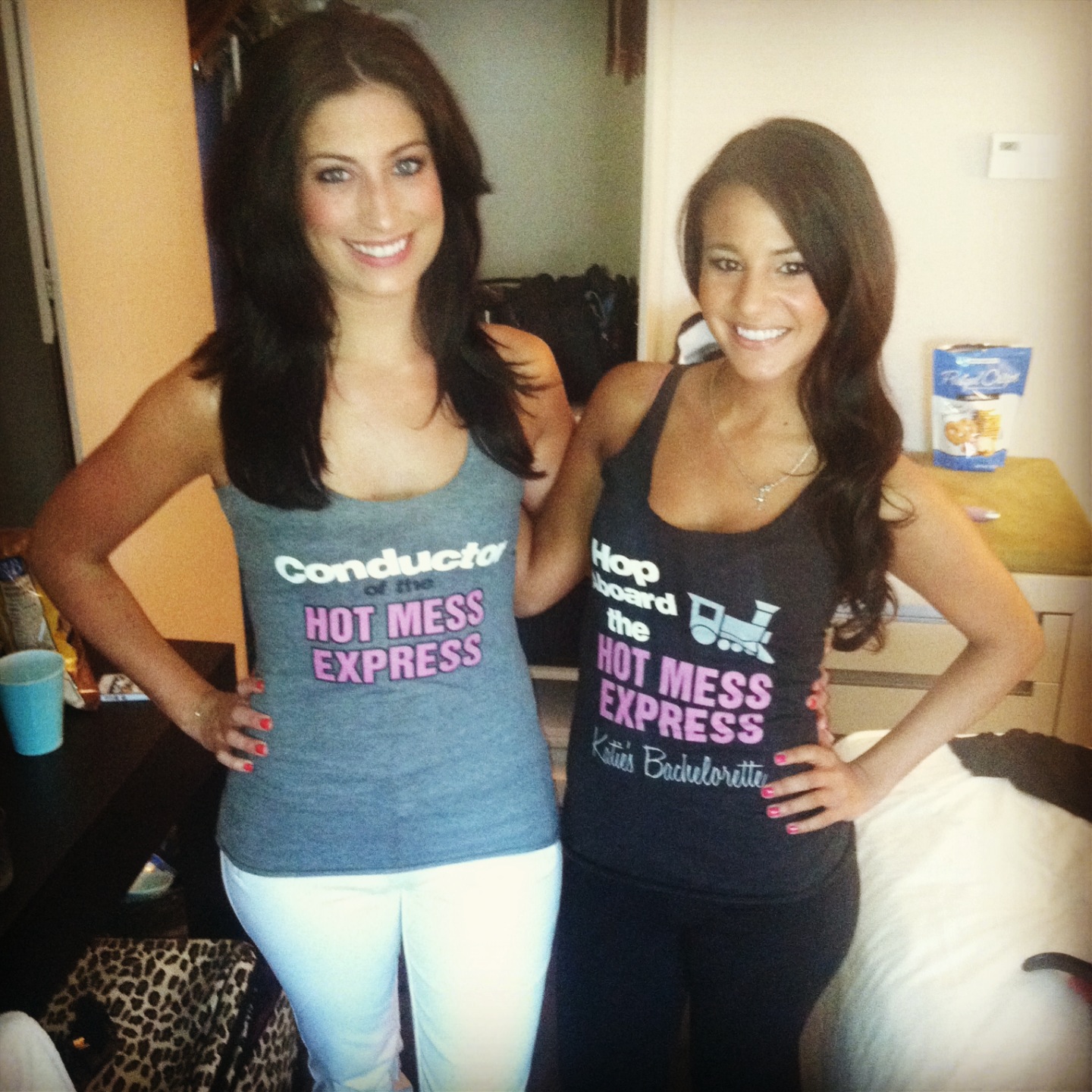 Label Rebel Olivia designed these awesome hot mess express shirts for her friend’s bachelorette party! They were a hit!

Here is the story behind Olivia’s “hot mess express” design!

“All of the girls LOVED the ‘hot mess express’ shirts for my friend’s bachelorette in Boston, including the conductor herself! We got tons of compliments and comments everywhere we went and the best part was that ‘hot mess express’ kind of became the theme for the rest of the wedding festivities! We also wore the shirts while getting ready on the wedding day and just could not stop with the ‘choo-choos!’”

“I have been going through Customized Girl for almost five years; ordered gear for my sisters’ weddings and a few of my friends’ weddings including bachelorette shirts, gear for the bride as a shower gift, and even funny personalized honeymoon shirts for the bride and groom. I think it’s such a different and thoughtful gesture for the Maid of Honor to design t-shirts for the bridal party because she essentially sets the whole tone for the party. And, if others are anything like me, I am ALWAYS last minute with this stuff. But my procrastination as never been an issue because most of the time I have ordered custom gear, it has literally been a week or two before the event and I don’t even have to pay for rush shipping because I almost always get the gear in a few days!”

Are you making a statement with your custom apparel? Are you creating your own fashion label? Let us know! We’d love to talk. Email CustomizedGirl@eretailing.com 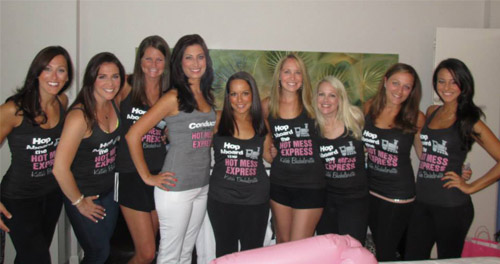 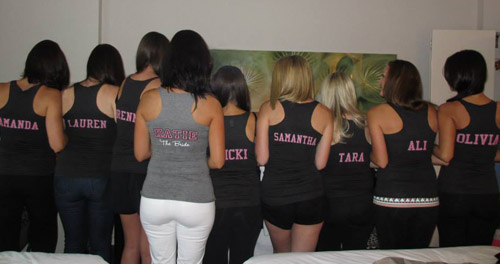 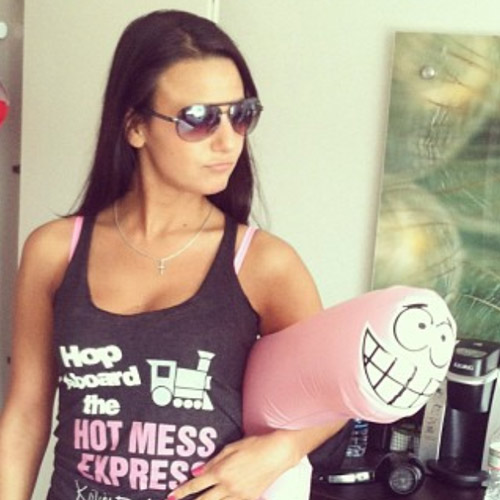 Want The Shirts? We’ve Got Them! 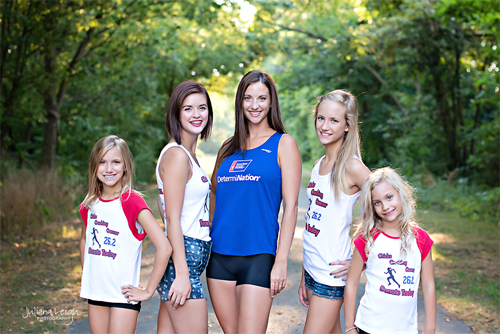 We said we wanted to put our customers in the spotlight and today is the beginning of that movement! Our customers create so many great designs for so many meaningful moments that it is time to share them with the rest of our community! When you create your original looks we consider you “label rebels” because you are not settling for apparel that others companies think you should wear. Instead you are creating fashion that is one-of-a kind on Customized Girl.

Our first label rebel is Amber of Chicks Crushing Cancer. Amber and her family are on a mission to raise funds for cancer research and the customer apparel she created played a big part in their fundraising efforts.

Here is the story behind her design.

“I have been using Customized girl for years to create and personalize shirts and gifts.  The website is easy to use and the customer service is great!  This year I decided to run my first marathon with the determiNation program to help raise funds for the American Cancer Society.  I will be running the Chicago Marathon on 10/13/13.  I was very intimidated asking people for money and didn’t know where to begin with fundraising.  I had an idea to get t-shirts made for me and my four daughters.  I started a facebook page called “Chicks Crushing Cancer,” which is the fundraising team I joined to raise money.  My daughters and I started wearing the shirts in each of our races throughout the year and the girls would also wear these shirts to the races too!  I always made sure to take lots of pictures of us and started posting them on my page.  I never even had to ask people for donations, only to “like” my facebook page.  Before I knew it, I had raised more than $1000 in a little over a month.

Today I have more than 200 “likes” on my page and over $2000 in donations.  We recently had a great photographer take some pictures of us in our shirts and I was really happy with the turn out.  Everyone has been so supportive and it feels good to be making such a difference.  I lost my dad to cancer a couple years ago and hope that we can some day find a cure.  I always tell people that EVERY donation counts and I try to get a $5 donation from everyone I see!

All online donations need to be in by October 28, 2013. [Amber’s fundraising page on the American Cancer Society’s website.] 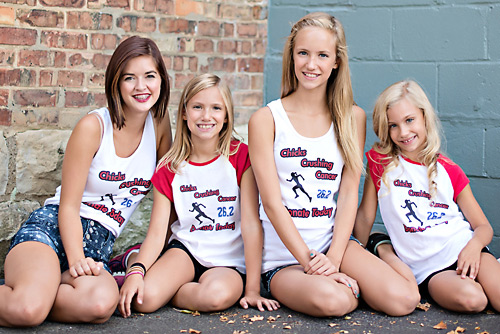 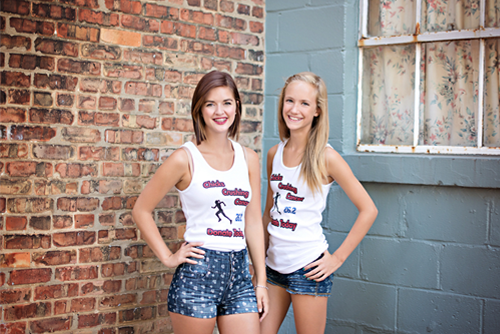 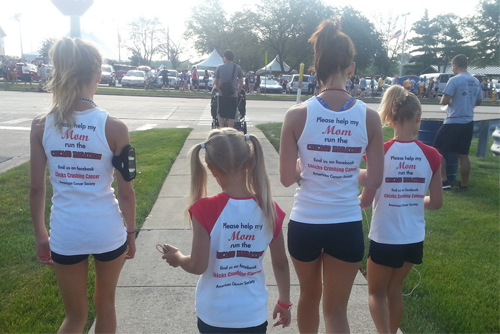 Are you making a statement with your custom apparel? Are you creating your own fashion label? Let us know! We’d love to talk. Email customizedgirl@eretailing.com.